Walked Inside a Bar...

The past, present and future walked inside a bar.  It was tense.
Posted by GhostFolk.com at 10:50 AM No comments:

I am so pleased to announce that Quercus Books has just released the UK edition of Dead Rules by R.S. Russell. That's me. :-)

A wonderful website, Serendipity Reviews, is sharing one of the many true ghost stories I have collected over the years. This one is from Burlington, North Carolina. You can read it here: Cricket Ghost, by Randy Russell.
Posted by GhostFolk.com at 12:34 PM No comments:

Ghost Cats, Ghost Dogs, and Dead Rules on the radio. From June with the fabulous Darkness Dave in Minneapolis.

Want to listen? Click here: Randy Russell on the Radio.
Posted by GhostFolk.com at 8:17 AM No comments:

Reversing the Trail of Tears

Too good to be true. But it is! Oh, and he lost his eye in the War Between the States -- when he was shot in the face during a card game. Wild Bill Hickock married the clown's widow, btw... Ah, Missouri, you miserable little piece of mud, you.

Jake Killian's father, Cyrus, still a direct grandparent of mine, removed from North Carolina on the 1833 Trail of Tears, ending where I eventually was born and grew up. Jake was murdered in Empire City Kansas, which is now Galena KS - where in my h.s. years I often drank beer and danced like an idiot at a club called The Ranch. I don't know if this is why Cyrus came to the area in 1833, though.

Perhaps more importantly, Cyrus's father was signed up w/ the 3rd regiment of NC Militia in the War of 1812 as a resident in, get this... Buncombe County NC. Asheville is the county seat. Hey, guys, I'm baaaaaaack!


It requires numerous generations of the Monarch butterfly to complete their annual community migration and return home. Might be the same with people. :-) Using my generation to reverse my grandfather's original migration on the Trail of Tears somehow feels right. What's a couple hundred years when you're having fun?
Posted by GhostFolk.com at 7:57 AM 1 comment:

The funnest town festival ever!! 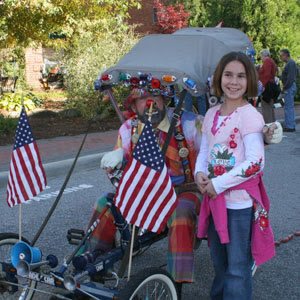 Come roll a pumpkin, or enter an eating contest! Everything happens on Main Street at the 15th Annual Franklin, North Carolina Pumpkin Festival.
Posted by GhostFolk.com at 9:33 AM No comments:

Getting Scared in Canton NC Today!

We'll be sharing spooky True Ghost Stories and a few other wild things in the woods today at 5:30 PM at the Haywood County branch library in Canton NC.

Just in time for Halloween and the rustle of fallen leaves.

Time too for some Halloween giveaways from me, Randy Russell, author of Dead Rules, Ghost Cats of the South, and Other Scary Books. Come see.

We'll scare the socks off Socks the cat.
Posted by GhostFolk.com at 7:19 AM No comments:

Ghosts and Pancakes for Everyone!

This time I'm having pancakes. Off I go down the mountain to the Davie County Festival of Booksin Mocksville NC, where I'll be introducing Ghost Cats of the South and a variety of dead high school people from Dead Rules at 11:30 a.m. Saturday Oct 1. And I get my own tent for an hour in Rich Park, just like the circus.

But first I'm getting pancakes on the road somewhere. Meet me there?

I'll be bringing along Ghost Dogs, too, you know, by me, Randy Russell.
Posted by GhostFolk.com at 9:13 AM 1 comment: 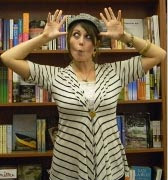 I'm having hours of goofy fun at BLUE RIDGE BOOKS this Saturday, starting at 3 p.m. What a treat to be in BEAUTIFUL Waynesville, North Carolina ~ one of the great mountain towns in Southern Appalachia.

I'll have some cool Dead Rules giveaways (just drop by and say hi, no need to buy a book).

I'll also share some TRUE local ghost stories. Yup, ghosts live in Waynesville, too.
Posted by GhostFolk.com at 9:19 AM No comments:

I'm sharing a letter (anonymously ~ from a reader in Edmond, Oklahoma) I received yesterday from a reader of GHOST DOGS OF THE SOUTH. The best part of writing is when someone likes what they read and takes the time and trouble to let an author know. Thanks, anon!

"I read most of Elf House this afternoon. I fell in love with Stanwell Perpett in the first two pages. Chaucer stole my heart, too. I wanted to live with them both, be a part of their life and the ducks! I loved the ducks, but I couldn't read past the pack of wild dogs and the icy pond... My eyes filled with tears. There was a lump in my throat and I couldn't, didn't want to know what happened, not yet at least.

"I mean I KNOW the story is going to end, but I didn't want it to. I loved those ducks and Chaucer and the thought of them dying and the possibility of Stanwell drowning trying to save them was just too much for me.

"I wanted to stay happy a little bit longer. I will continue reading and finish later, but I just can't now. You had me drawn into that story so deeply that it wasn't a story to me, it was real."

My follow-up book of ghost stories, GHOST CATS OF THE SOUTH, is being released in paperback this month. You can browse inside and read one of the stories here: Ghosts by Randy Russell.
Posted by GhostFolk.com at 7:49 AM No comments:

Posted by GhostFolk.com at 10:22 AM No comments: